St. Agnes is a faith community centered in the Eucharist and dedicated to spreading the good news of the Lord Jesus Christ; in order to foster spiritual growth through prayer, worship, ministry and fellowship. 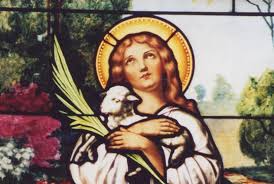 Almighty and everlasting God, you choose what is weak in the world to shame the strong. Grant that as we celebrate on this feast the virginity and martyrdom of blessed Agnes, we may enjoy the help of her intercession.
Through our Lord Jesus Christ, your Son, who lives and reigns with you in the unity of the Holy Spirit, God, for ever and ever.